As a Kamaiya woman, Dilbasiya Chaudhary used to work hard as a farmer for a landlord, with shelter and food as her only payment. Now she has been able to change her own situation, becoming part of a group of women growing vegetables in their own farm – supported by SWAN. 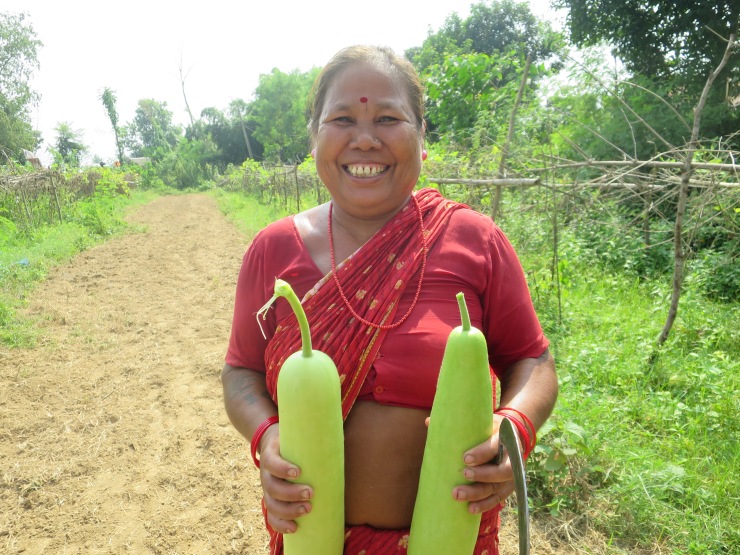 Dilbasiya lives in the village Narti in south western Nepal together with her husband and their son. Narti is situated in the lush lowland called the Terai, where a majority of the population are dependent on agriculture as their main source of income. Since 2017, Society Welfare Action Nepal (SWAN) has been running the project POWER to strengthen the rights of landless people and Kamaiya farmers, working on land owned by landlords.

As many others from the Tharu community, Dilbasiya worked for a landowner with food and shelter as her only payment. This is called the Kamaiya practice and has long been common in the Tharu community – a group which historically has owned and cultivated this land. Because these farmers did not have certificates of ownership for the land, they were forced to work for landlords.

The continuation of this system is perpetuating unequal power relations between the castes, putting the farmers in a position of great economic insecurity. As the majority of people in this community have little or no opportunity to buy land of their own or find other ways of getting an income, the unequal distribution of land has been a way of institutionalizing inequalities.

The Kamaiya practice has now been banned by the Nepalese government, but it still exists in some places. The Nepalese government has introduced policies stating that landless people have a right to own their own small piece of land, which is supposed to be given to every household by the state. However, the process of implementing these new policies has been long and slow.

By organizing themselves with the support from SWAN, the landless community in this area has been able to put pressure on the state and on large landowners who do not take their responsibility in assuring the rights of landless groups. Today, Dilbasiya and the other women of the group is no longer working as Kamaiya. Instead, they lease a piece of land to use for farming.

This has been a challenge, says Dilbasiya. Since she has no education, is it difficult for her to claim her rights. Before joining the group, she did not know how to write her own name. Therefore, the support provided by SWAN is making a big difference, making it possible for them to claim justice. By mobilizing the community, they can make their position towards landlords and the local government stronger.

SWAN is currently supporting 20 different groups in the area – providing money for land leasing and giving training in things such as modern farming techniques, entrepreneurship, leadership and advocacy. They are also actively advocating and lobbying to strengthen the rights of landless communities, as well as raising awareness among community members of their rights as landless – both to land and to access to other government services and resources.

Neither Dilbasiya nor the other members of her group work as Kamaiya anymore, instead they have their own small vegetable farm. They started the group in 2007, mobilizing to work for their rights as landless farmers. When the new project was initiated two years ago, they received support from SWAN so that they could buy seeds and a mechanical water pump, to start growing different kinds of vegetables. They also participated in trainings on agricultural technique, learning what plants to grow, how to look after them and how to sell them in the market to earn money.

-We were very successful from the beginning, says Dilbasiya. Before I became part of this group I didn’t do much, she continues. I didn’t know how to change my situation for the better, but I know that now.

In the beginning, the group was a bit hesitant. But from the first harvest they were able to sell their vegetables in the market for a profit of 15000 Rs per person. Now, they can harvest three times a year, making an annual income of 45 000 Rs per person. This is making a big difference for all the members of the group.

Nepal still has a long way to go to assure the rights of marginalized groups, such as landless communities. SWAN is advocating for the state to be held accountable for the issue of land rights. This is however made difficult by the current political situation in Nepal where neither the national, regional or local government is taking full responsibility. Because of a large restructuring of the state apparatus, progress has been slow. Initiatives like this however make a big difference for the local community.

-I know now that I can do something to get a better life. I know that if I have money, I can send my son to school, says Dilbasiya who is very proud of what the group has achieved so far.